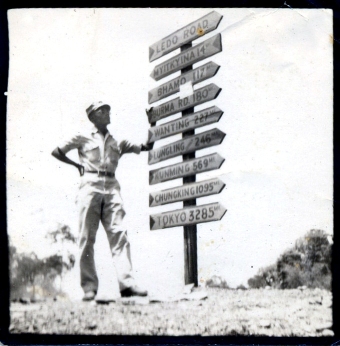 When I laid eyes on this photo, I felt an immediate identification via a deep sense of uncertainty I wrestle with daily. There are some things I know:  My name, place of birth, general location on the planet earth at this moment. There are  things that I do not know:  Whether I’m going to raise enough money to attend this program I want to so badly.  What am going to do if I fall short of my financial goals and don’t end up going? What I’m having for breakfast? Lunch? Dinner?  As usual, its the what I don’t know that’s eating my lunch right now.

Like the photographic subject I am a soldier in the middle of a war.  Unlike the subject, my war is unfolding between my ears. I battle myself for my attention constantly. I battle to stay focused  on the task at hand.  “Eyes. On. The. Prize.” has been my mantra lately. But with atomic bombs of distraction going on, it makes it pretty hard to stay in the fight.  If I played the sound track  to the feature film Inside Stacey’s Fugged Up  Mind, you’d hear the sickest mash up of shit that makes absolutely no sense together. Broadway tunes, story ideas, to do lists, disaster scenarios, positive affirmations, negative affirmations, and *clears throat* unnatural/unhealthy desires are all doing the shimmy shake around my psyche.  It’s a wonder I can walk, think, and breathe at the same time.  Some how I manage to.

I first try to remember that I have tools that point me in a Good Orderly Direction.  Prayer, meditation, a network of people that love me. It’s just making myself use them! It’s riding out the feelings of not  falling back into my old familiar boobie traps like my ex-husband or the Cheddar Chicken Melt at Cook Out. When I do use my tools and I don’t do things that are going to make me feel like shit about myself later, it gets better.  It doesn’t always free great, but I avoid self made disaster scenarios that often lead to me hitting the self-destruct button and checkin’ out all together.

Mostly, I just want to be at peace.  I want to feel “at home”, which I’ve not felt in a long while.  If I had to guess I’d say it was before this whole grad school process began.  Hell, maybe even before that. Riding out emotions straight no chaser is definitely not for the faint of heart, but bit I’m doing it. I’m glad I know that nothing impermanent is certain. I am practicing the art of war against self. Against the false belief that my happiness can be born from anywhere else but right inside of me. Understanding all this on a gut level? Well, that will come with time I hope. According to Mick Jagger, it’s on my side 😉

“Man to hell wit what you talkin’ bout!”
“I’m serious now.  I tell you there ain’t nothing like a woman with great big legs.”

“Big women treat you good Marsh, and they cook!”

“I ain’t nevah met nobody fulla more horse shit than you Octavius Greene. I declare. If you wanna talk to her friend, go on over there and talk to her and leave me out of it.”

“Women team up.  I ain’t gonna get two words outta that gal unless I bring you with me to keep Lena busy, you know that.”

“Take a sandwich over there.  That’ll keep her busy.”

“You ain’t worth a damn. What you got against Lena anyway?  Seem like I can recollect last summer you ain’t have a problem with Lena being plump at all. Seem like what I remember is you liked that a whole lot.”

“Get on away from me Octavius.”

“Marshall Chesterfield let a woman put him down! LAWD have mercy! The dignified educated nigger himself!”

“I said be quiet you red sonofabitch!”

“Marshall, what’s the matter with you man?! I was just joshin’ with you.”

“She said I was too black.”

“Yeah, said we could fool around however much we wanted to, but she couldn’t marry me.”

“Shit yeah man, the Taylors are a good family.”

“That why you wanted to marry her?”

“Yeah! Her father could get me a real good job when I get outta school. I had it planned out.  After you left last summer.  I courted her … boy I tell you, I bought that broad flowers, took her to the pictures, we was gettin’ pretty hot and heavy, then she laid it on me: “I like you a lot Marsh, but my daddy won’t let me be with nobody near as dark as you, plus you don’t really come from nothin’ ”

“Marsh, you know them Taylors.”

“I ain’t gonna hear too much more a that.”

“What you gone do yella?”

“I’ma beat yo black ass is what I’m gone do, but I gotta do it before sun down else I won’t be able to see you.”

“You a fool Octavius.”

“Yep, a fool looking for a good time.  Now you gone go over there with me so I can get the first shot at this fine new gal or what?”

“You rascal!  Look they wavin’ at us. Lena even got a camera. She gone take our picture.”

“I sure hope you show up in it.  It is daytime you know.”